CallConnect operates six-days-a-week: 7am-7pm, Monday-Friday, and 7:30am-6:30pm on Saturdays.  A full list of locations and places served by the North of Lincoln service are available below. In addition to our easy-to-use bookable bus service, there is the additional timetabled service: Service 11a Scothern to Lincoln, to complement the on-demand bus service.

Due to the comprehensive network of bus services in Lincoln city centre, we do not offer journeys that are exclusively within the city. 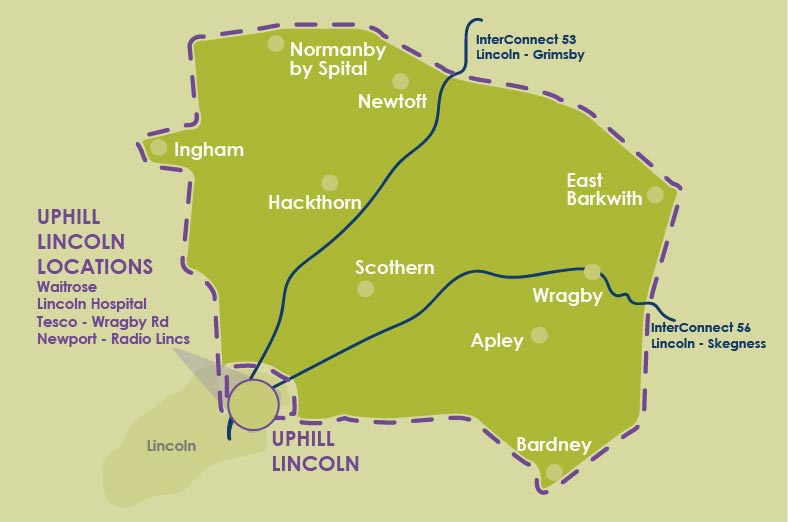 * Also served by a timetabled service.

Lincoln and the north of the city are both historic, bustling and just minutes away from picturesque villages and hamlets. Lincoln is a university city and the capital of the county. The city is at the centre of Lincolnshire’s inter-urban and InterConnect bus routes and has a network of frequent city bus services. As well as a new and easily accessible bus station, the city has an historic and beautifully restored railway station with direct routes to London, Sleaford, Gainsborough, Market Rasen, Newark, Nottingham and Spalding, to name a few.

Uphill Lincoln is home to Lincoln Cathedral and Lincoln Castle, both internationally important historical buildings. Often named as one of the best places to live and visit in the UK, it’s easy to understand why when you visit one of the many beautifully preserved historic landmarks. The city is also home to many important buildings and objects such as the Magna Carta, International Bomber Command Centre, Newport Arch, and the Lincolnshire Life Museum which celebrates the city’s pioneering engineers who developed the first tank.

RT @StagecoachEMid: #LIncoln @LincsBus. Due to a Issue with the bus, the 15:45 service 9 from the Birchwood centre to Lincoln Bus Station w…

@SkegnessCouncil Thank you for sharing this information!- MK

RT @StagecoachEMid: #Holbeach #Service505 will be diverting on Saturday 3rd December due to a Christmas Event ➜ https://t.co/pshDSAXZfj htt…